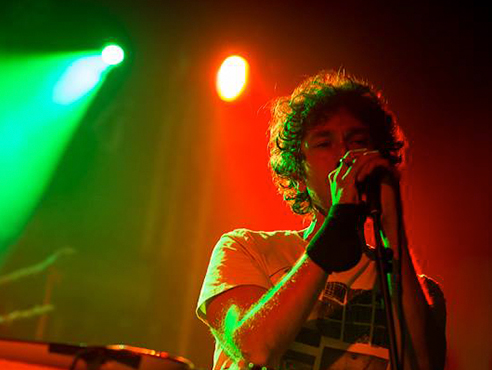 JuJu is the latest incarnation of Sicily-based Gioele Valenti, who has previously recorded under the name Herself several records of apocalyptic folk lo-fi songs and was also a member of the Lay Llamas for the recording and touring of their Ostro album. His most recent release as Herself was the Gleaming EP, a fantastic collaboration with the Laissez Fairs (the Las Vegas based maximum Mod/Psych band formed by John Fallon ex of the legendary Irish/American 80s Psych band The Steppes), read the Strange Things Are Happening review here. His new project, released by Sunrise Ocean Bender, is an excursion into the Psych Magik of West African rhythmic psychedelia, ancient myths and Mediterranean neo-paganism. Mixing African grooves with distorted Psych Rock, the new JuJu release is a concept album of sorts, telling the story of  an on-going exodus from Africa that more often than not ends in ignored tragedies at sea, ‘a total defeat for humanity.’ Inspired by sources of Earth magic and soil secrets, JuJu strives to turn that defeat into a celebration of spirit and modern psychedelia…….. An endless thought to the forgotten of the sea……… We Are You.

This is a cyclical tale, beginning with the horrors of war and chaos that leads to a mass refugee flight to the coast and lost souls taking their chances with perilous boat journeys (which ultimately ends in disaster). The story goes full circle with even more poor souls needing to escape war and famine in a never ending cycle of despair as even more are lost to the sea. The album opens with ‘Samael’ (who is an Angel from Talmudic lore that brings death and destruction……….thank you Google) which has a pulsing bass heavy AfroPsych groove, a sound not unlike the mighty Goat’s shamanistic rituals, before shifting up a gear and easing into the driving krautrocker ‘We Spit On Yer Grave’ who’s relentless motrik beat and swirling, distorted guitars reminiscent of TOY’s  Neu! influenced tunes. The rest of the record is equally impressive as the tale takes sail on the waters of the Mediterranean with the propulsive ‘Stars And Sea’ and ‘Sunrise Ocean’ linked together by the mournful piano and found sound sketch ‘Dance With The Fish’. This theme of desolation is continued with ‘Lost’ which starts with haunting piano and guitar before exploding into a full on contorted Psych Rock wig out of fuzzed out guitars and distorted voices. The whole thing then returns back to the start and we begin the whole journey again with the heavy fuzz rock AfroPsych of ‘Bring ‘Em War’……….JuJu is a poignant story of hope and loss, which we suspect has an element of personal reflection, with Gioele’s home of Sicily being one of the main refugee routes into Europe from West Africa, and wonderful blend of Psychedelia mixed with Afrobeat that is well worth spending time with……another great SOB release.