Big Love from Terrascope for a Big Set of Records 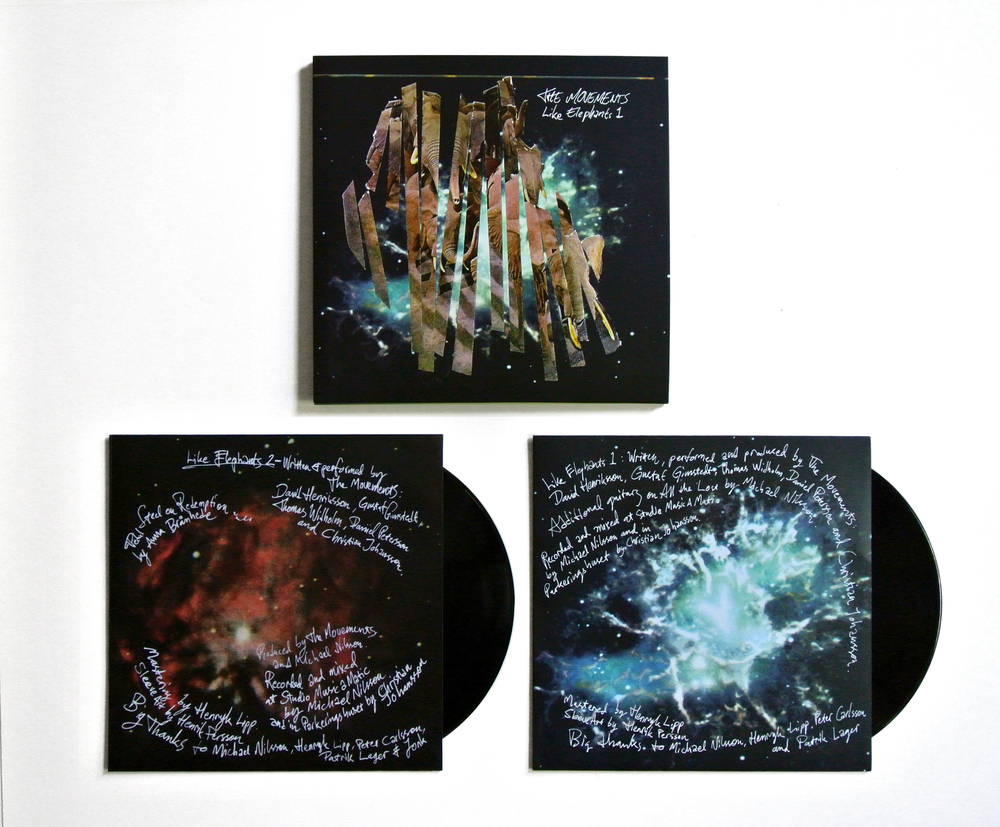 Released at different times, these two albums are undoubtedly meant to be heard as a pair. Together they roam through the best guitar music of the last few decades, blending their influences into something new, exciting, vibrant and just plain excellent.

Hailing from Sweden, The Movements should not be surprised if the word sprawling is found in many a review, the breadth of their influences and skills, as players and songwriters, means it is quite difficult not to use the word, especially when you sit through both albums one after another.

Opening with a little country-rock flourish, “The Death of  John Hall” soon morphs into a mix of  The Byrds, and Simon and Garfunkel with added brass and the smell of Mariachi. Nice and energetic as well, the tune is a fine opening salvo that runs sweetly into the psychedelic swirl of “Boogin”, a loose guitar riff allowing the band to stretch out for a while, spreading West-Coast happiness and encouraging the dancers in your head. Containing some excellent guitar interplay as well, the middle section sounds like Tom Verlaine jamming with John Cippolina, extreme guitar loveliness indeed.

Displaying their pop side, “Two Tongues” has melodic sensibilities, a great riff and is easy to sing along to, sounding like a classic sixties tune, the same vibe to be found on “The Great Deceiver”, although this time there is a darker edge, the spirit of Love and The Raconteurs to be find within the song, the whole thing building in tension as it motors along.

Delightfully lysergic in its grooves, but not sounding the least bit retro, “All the Lost” has a bright modern feel, droning organ and an excellent vocal delivery to boot. On “David’s Song” the sixties vibe returns, the Seeds or SAC coming to mind as you listen to the music, each musician completely in the groove allowing the song to glisten and sparkle in your ears.

As the album progresses, all these influences merge into a veritable feast of psychedelic and melodic tunes, the band forging their own identity as shown on the title track, which just sounds like The Movements, a sparkling tune with slightly odd lyrics and plenty of chiming guitar. To round off the album the last couple of tracks (one of which I can’t read the title of) allow the band to explore spacier territory, flying off in a haze of guitar, a mix of Shoegazing repetition and psychedelic exploration that works brilliantly paving the way for the gentle Folk-Psych of “It Takes A Spark”, a gorgeous tune that will get you singing along, the chorus stuck in your head for ages afterwards.

Moving swiftly on, part two begins with the sounds of traffic and echoed voices/sounds creating a weird mood that suits the riff that heralds “Six Feet Under” a slow-burning and moody tune driven by excellent drumming and an increasing sense of tension. With a nod to “Paint It Black”, the Eastern tinged psych of “Stolen Lore” is an early highlight, whilst “Ice Cold” has the same piano sound/ambience as the one on “Moonbeams and Bluejeans”, the song introducing a new side to the band and adding to that sprawl.

Displaying some Garage attitude, “Everybody Needs Something” has plenty of distortion amongst its grooves, the mood changed by the gentle rolling country feel of “Redemption”, the band again surprising you with their willingness to swap genres as well as their skill in actually achieving it.

After the R’n’B stomp of the energetic “Yesterday, Now and Forever”, things get a bit weirder on the slowed down ambience of the title track, an almost chanted vocal line, repetitive percussion and drones creating a deeply psychedelic feel that is topped off with guitar touches the do not overcrowd the piece.

To finish the collection, “What Would Happen If I Tried” is one of those “bring it all home” moments, acoustic guitar and organ working together on a warm and sweetly chiming riff with an electric guitar adding some soft dissonance to the proceedings, the song slowly disintegrating into nothing, leaving you with a big grin and a desire to hear the whole album again. (Simon Lewis)