“ … an experience at different scales … ” 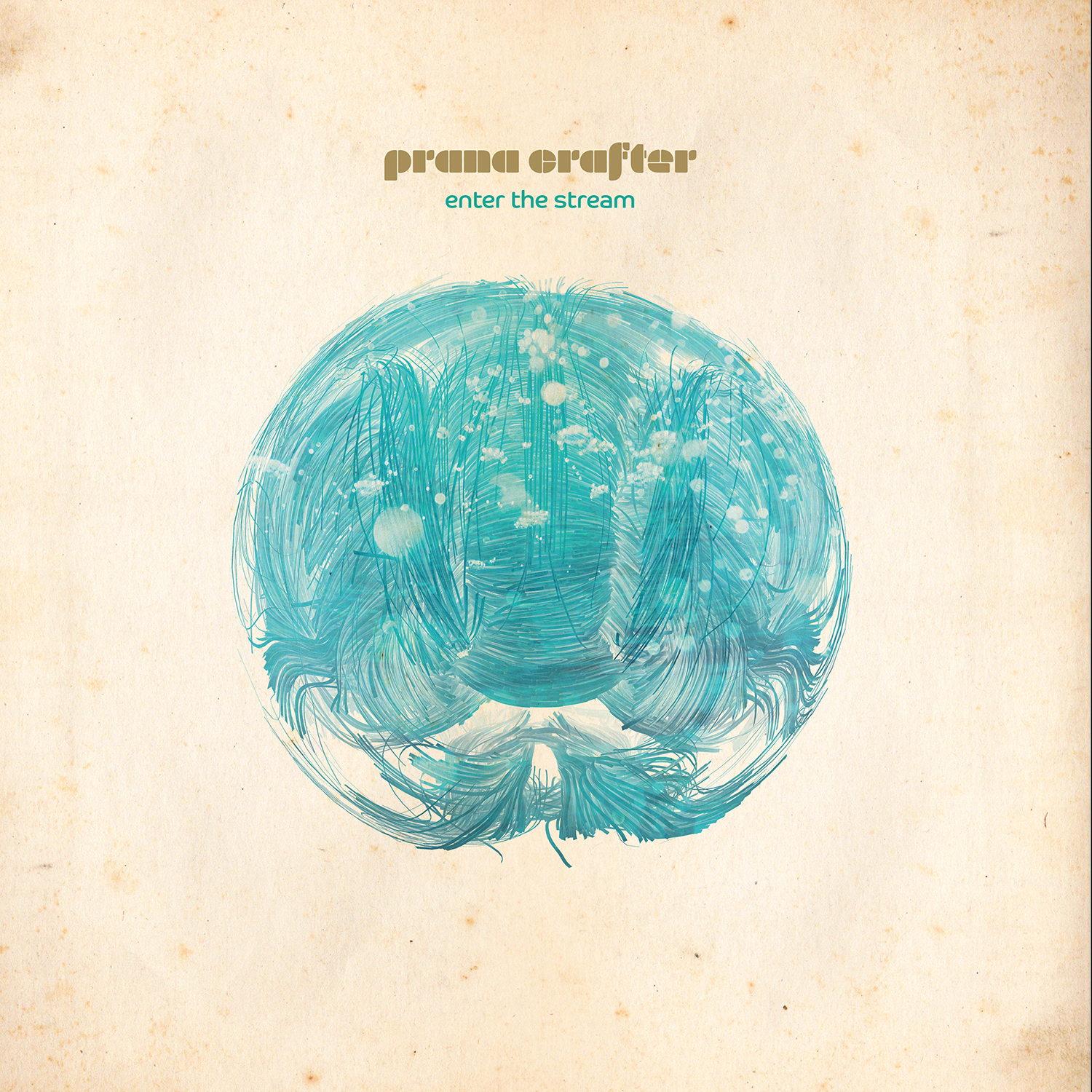 The inspiring and at times, demented work of Father Yod and his band Ya Ho Wha 13 often referred to the ‘eternal now space’. An ever-present crest of a wave, we all travel atop in a moment of ever-moving consciousness. We are at the pivot point between what just happened and what happens next. As the Zen teacher Shunryu Suzuki said, we are simply at the door between breathing in and out.

These joining of moments all means it’s impossible to really get to the point when one instant finishes and another begins – there are no seams or edges, just an ever-modifying flow…

And as a time based medium – music clearly could be regarded as a linear thread, a succession of sounds, ideas, textures, rhythm, melody, themes, twists and turns. An echo, a soundtrack and a backdrop to the fundamental experience of existing.

Enter The Stream is the new album by Prana Crafter and dances around all these ideas. The stream is the ribbon of silvery mountain water on the back cover, the neural map of brain activity on the front. And all the captured moments of pre-planned and improvised sounds and words that add up to this whole 37-minute sonic experience. It’s the continuous groove gouged out the vinyl, it’s the string of zeros and ones. The invitation is to trigger your preferred device into activity and enjoy the tumbling cumulative effect of the journey.

Of course, the theme of music as a river has been used literally in classical music. It also may well point towards some prog type structure or even a concept album but in the hands of William Sol (who is Prana Crafter) this is a much more elegant and subtle form than some half-baked tale of river goblins at war…

Prana Crafter’s last album – the remarkable Bodhi Cheetah’s Choice, was a completely instrumental vision. Enter The Stream revisits Sol’s earlier format of melding affecting acid folk ballads with instrumental passages and textured blooms of guitar based ambience. Whilst this may seem to have a polarising effect, the reverse is the case throughout the disc.

The album opens with slab of singing bowl giving way to the instant classic title track Enter The Stream. A beautiful, melodic and emotive scene setter. This is a hit single beamed directly from the forest; it pulls in the listener and overwhelms with its gorgeousness. The huge gently arcing waves and buried organ tone creates a beautifully airy sing-along psych ballad.

All the tangents and momentum of the opener stretch and mutate through the water sounds into the darker Moon Through Fern Lattice. A miasma of layers and grooves never quite aligning into a jet engine scorched AR and Machines infested thicket.

It seems impossible not to consider Sol’s work in the wooded context of his rural Washington State home. The fresh air, abundance of nature, the reality and the portals of spiritual discovery all shine brightly in the music. Mycorhizzal Brainstorm is a slow camera pan though the damp soil of the riverbank. A soundtrack in miniature of dew drops, transported nutrients and electronic synapses.

The chiming swaggering guitar blanket come in like a weather front, the instruments echo the shape of the words in The Spell. Another picture painted in sound around a moment of silence. Human emotion and the hard edges of silence and science in a blender, creating a powerful moment in the wilderness were weird things just click. An overwhelming encounter between nature and a brain absorbing it. ‘Atoms aligned, I love you’.

You just know that Sol could take you right to the very spot that Pillow Moss Absorption was inspired by. A neon green, dew encrusted micro community of fleshy plants. Now immortalized and celebrated in almost seven minutes of droning pulsing musical spaciness.

There is an honesty that seeps out the music and lyrics. In discussions with Sol around the release of Bodhi Cheetah’s Choice, it’s clear the improvisational quality of his work is very important. The energy that Sol channels is outlined in the carefully chosen Prana Crafter banner. He’s very conscious that the music retains a purity and that means he’s resistant to rein things back when an unexpected element emerges. Sol clearly thinks of himself as a conduit for the music and he’s right. The same for his song writing. At times highly personal and gently psychedelic, he’s not hiding behind any genres, traits or notions of coolness, the underground or even a flirtation with more mainstream music. Sol wears his kosmic heart on his sleeve.

Overall, this disc boldly attempts a lot, and covers loads of ground. The experience will ebb and flow depending on what chimes with the listener. However, I suspect its biggest success is that it is almost impossible not to listen to the whole album. In a world with an ever decreasing attention span, this begs or more. Musically and lyrically, it creates several beautifully observed, psych-tinged vantage points, creating an undulating twisting journey. Enter The Stream is an experience at different scales using a variety of approaches and tools. The cumulative effect leaves the thread of a journey in your massaged brain.