“…twin-engines of tone and timbre…” 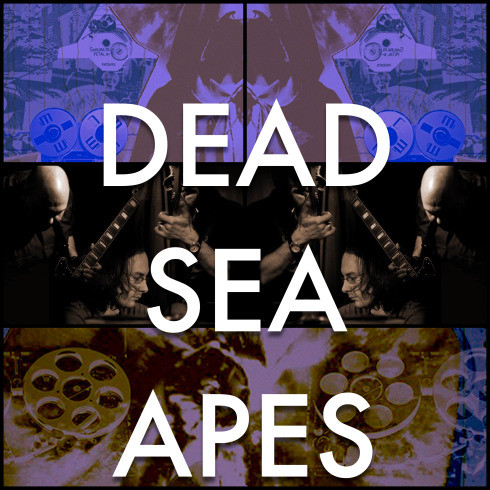 There’s an undeniably deep – and perhaps unjustifiable – personal connection that we feel in regard to the music of Dead Sea Apes, the UK-dwelling, three-headed hydra of space-dub who’ve recently released their third and arguably finest full-length album to date, “Spectral Domain” (a co-release from Cardinal Fuzz and their stateside partners, Sunrise Ocean Bender).

It’s a connection that, frankly, probably has something to do with the use of the word “ape.” But there’s also something much, much deeper than that. Yet having now been listening to Dead Sea Apes rather intently and undoubtedly intensely for the better part of five years, it’s difficult to parse out exactly what it is that sets “Spectral Domain” apart from the Ape-scapes that preceded it. Indeed, this album stands up nicely as simply a multi-dimensional prism of their first album, the world-beating “Lupus,” reflecting related territories, now further refined, but with a sound that cascades even more broadly, powered by a more muscular sense of sonic sturm und drang. That Dead Sea Apes seem to be growing steadily “heavier” – in the most sacred, most inexpressible sense of the word – is a bit counter-intuitive. If the earliest Dead Sea Apes material was heavily indebted to the power of the almighty riff, “Spectral Domain” sees the band training their collective third-eye on the invisible twin-engines of tone and timbre.

The tonal transitions that build the band’s battered bridge between wondering and wandering are evident in every single minute of “Spectral Domain,” without a single lost or wasted moment.

The ten minutes-plus of “Universal Interrogator” set the tone for the album as a whole – deliberate, unhurried and unafraid to paint their shared canvas several shades darker than “nefarious.” It seems key that the first word on “Spectral Domain” references the universal, especially given that the Apes provide no context clues in the form of vocals. It seems that the true magic of “Spectral Domain” – and the true magick of Dead Sea Apes, historically – is the band’s ability to create from thin air a shared musical language between its three members. In their capable hands, this experience tracks as something several meaningful degrees apart from simply “jamming,” and towards a freedom to roam and explore that envelops the listener into an exercise in Gnosis.

Big-G “gnosis” is not a concept that lends itself to easy explanation; in fact, it may defy explanation by its very definition, as does the music of Dead Sea Apes in general, and “Spectral Domain” in particular. Hailing Dead Sea Apes’ unearthly dub-gnosticism is a tricky proposition, as it’s quite literally impossible for us to write something that your ears don’t instinctively know. Yet somewhere between Armageddon and salvation, somewhere amid the P.K. Dick-meets-King Tubby-in-space environs masterfully manifested on album-closer “Sixth Side of the Pentagon,” there’s a shared knowledge that awaits transmission, and it begins with the realization that there’s no band on earth heavier than Dead Sea Apes.

Revolt of the Apes