“Chef Menteur are a force to be reckoned with … ” 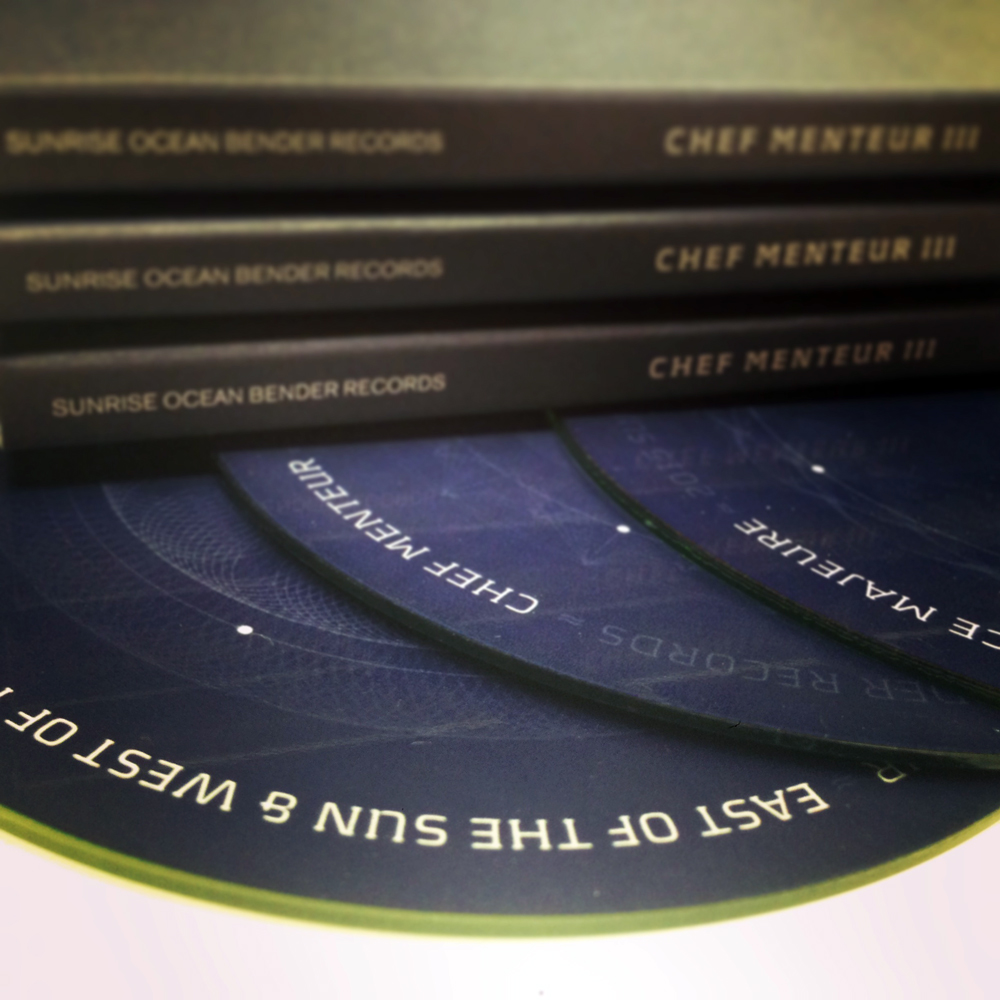 On our endeavors to seek out new and unusual space rock, we have to travel to New Orleans, LA where a four-piece band known as Chef Menteur resides. We haven’t the foggiest idea why they don’t have more of an underground following since their blend of instrumental space and psyche rock is so broad and immense. Through the up and coming impressive label Sunrise Ocean Bender, Chef Menteur has released a 3-Disc set simply titled III. This set includes a re-release of of their 2012 album “East of the Sun & West of the Moon,” the unreleased ‘companion’ album “North Tomorrow & South of Yesterday,” from the same sessions and their newest album 2014’s “Force Majeure.”

These four musicians are extremely talented and feed off each other very well. Their music is difficult to pin down, at times it’s mesmerizing ambiance or heavy droning space rock. They even take their music into progressive rock territory as well. For an instrumental band, it would seem difficult to keep the listeners’ full attention for all 3 discs, yet they have managed to capture our attention and not only hold it, but have us coming back for more. Since there is such an enormous amount of music to get lost in, 23 tracks totaling 2 hours 45 minutes and 47 seconds, it’s impossible to describe in a song by song break down. We recommend you take your time and let the music seed within your conscience. We’ll do a brief overview of each disc as it would take a novel to break this one down.

The first disc takes off right way with “Narconaut,” sounding like classic Farflung, its heavy and very spacious, all three musicians are in total synch. With echoed guitars, psychedelic synths, a rich gravity deifying bass, and mesmerizing drums, this song has it all, and its only track one. The disc keeps us our interest with the infectious acoustics and bass in “Il obstrue ma vue de Vénus,” which is one of the stand out tracks. We absolutely love the diversity the band brings forth with the jazzy trumpet in “Terpsichore” and the electronic ambiance of “The Forest”. As the album progresses it continues to hold our attention and we have no desire to skip to the next track. The two longest songs “Oxen of the Sun” and “Ganymede” will suck you into their spaced-out, trippy atmosphere as they have this anti-gravity, hypnotic feel. The last few songs continue to impress and become impossible to describe in words. With compositions ranging from Hawkwind-like psychedelics to Middle Eastern soundscapes, just check out “Ordo Templi Orientis,” the sound is so damn impressive when cranked up. Disc one is a space rock gem on our books, let us now travel to disc 2.

The songs in this disc was recorded during the same sessions as disc 1, but never saw the light of day until now. We are stoked that they finally were able to release these songs, its more space rock to sink our teeth into. The band continues on its journey with a slightly different formula on this disc. The music seems a bit more relaxed here, the overall ambient-space rock aura drew us in and captivated us. Songs like “Farfisa Duo Raga,” Terpsichore,” “The Long Stand (Part I and II),” “Lozenge Jazz Club,” “Phallus Marinarus” will hijack your mind and absorb you. Just let go and take these songs in, they are open-ended, spacious and dynamic. Now that we are in a spacious state-of-mind lets now move on to the last disc of this set.

The last disc of the set was originally released in 2014 on cassette only, and has just now been transferred on disc for this limited package. This album has a more potent, upbeat sound than compared to discs 1 and 2. You wouldn’t think this from the onset with the first track, it’s a long peaceful ambient affair. Track two, “Pyrymyd Scheme” really gets the blood flowing, it’s extremely catchy and upbeat with magnificent bass-work. ”Death Wrath” is another vibrant song with more outstanding bass and possesses a trippy feel. “Surface Tension” is great and has that surf meets space rock vibe, it’s a very smooth track. The last song and ending our experience with Chef Menteur is very entertaining and embodies everything we have like about them. This one injects some elements of shoegaze into the mix. Its odd rhythm is highly contagious and the way the band subtly change rhythms is impressive. A great way to close out 2 hours 45 minutes and 47 seconds of trippy, illuminating space rock.

Chef Menteur are a force to be reckoned with, it’s amazing they don’t have a bigger underground following. We must thank their label Sunrise Ocean Bender for releasing this 3 disc set. There is not much more we can possibly say, we highly recommend you gobble this one up if this is your cup of tea. This package is a limited release, but is also available digitally. We highly recommend the disc package, as far as MP3s have come, the sound quality on disc would be tremendous. – 5/7/15