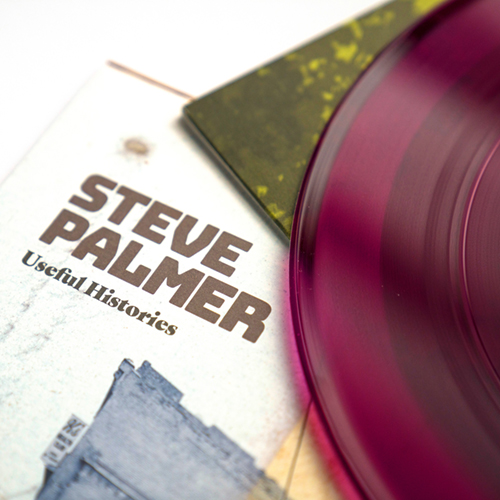 I must admit, this album past me by when it was released a month or so ago and boy, do I regret that now! Brought to us by the twin Kevin attack of Sunrise Ocean Bender and Deep Water Acres ‘Useful Histories’ will undoubtedly prove to be one of the stand-out releases of 2020. Steve Palmer is a guitarist hailing from Minneapolis and this is his second release following on from the 2014 ‘Unblinking Sun’ CD. What is immediately apparent is that Palmer is a quite exceptional guitar player and, as if that wasn’t impressive enough, ‘Useful Histories’ was made whilst Palmer adjusted his playing style due to a neurological condition….some people are just so goddamned talented!

Opener ‘Statesboro Day’ sets the tone nicely – a fluid motorik number that chugs along and envelopes you in a Neu! shaped cocoon. It is eleven minutes long but this flies by in a kosmische reverie. ‘Squalor’ follows and the initial static hum would seem to indicate we are in for something electronic based but this proves to be shortlived when Palmer starts some exquisite finger work. It is highly reminiscent of MV & EE’s ouvre…distilling down some American primitive into something more contemporary and distinctly ‘psych’. ‘Thirty’ takes the same template but whilst ‘Squalor’ transports us to a shady forest clearing, ‘Thirty’ takes us for a sojourn in a dusty, sunbaked desert..it is deeply evocative and atmospheric. ‘I Am John Titor’ ( a reference to the supposed time traveller I’m guessing) is undoubtedly the centrepiece of the album. An oscillating drone lulls us into an almost transcendental state. As the track progresses sedately along its almost twelve minute length the drone is joined by muted flashes of guitar that add to the mood rather than distract from it. The guitar gradually becomes more pronounced, lilting lines that make this a beautiful piece of sound art. The album is closed with the title track; another in which Palmer’s skill is highlighted. Layered guitar tracks morph into a majestic whole .. reverb laden and continually growing until it becomes a psychedelic epic, albeit it only six minutes in length.

There are times when I think that the whole ‘psych’ scene has become stale and unwieldly and then…wallop! a gem like this lands. What Palmer has achieved is monumental – taking different styles and creating soundscapes that all reflect different geographical personalities – and it should be lauded as such. Taking us from autobahn to Mojave via Appalachia ‘Useful Histories’ is a veritable Grand Tour and all made possible by some masterful guitar work. Savour this album folks.

‘Useful Histories’ is available in black or transparent violet vinyl from Sunrise Ocean Bender here or via Deep Water Acres here. In the UK Cardinal Fuzz are carrying some copies here. The digital version can be downloaded here. Whatever format floats yer boat…you need this.