“…all forms of resistance are useless…” 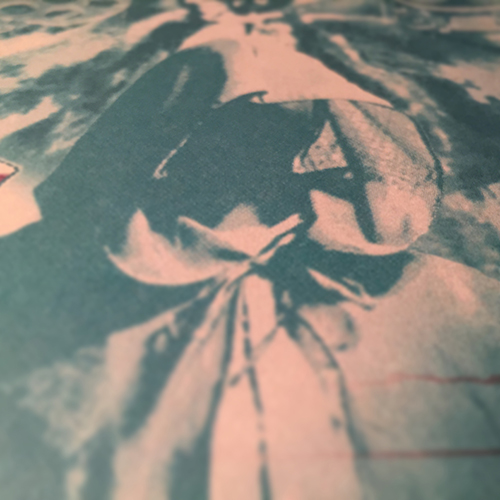 Spectral Domain catches the most magnificent Dead Sea Apes in rambunctious temper – it’s third album time, but the opening “Universal Interrogator” sounds like they’ve been waiting a lifetime to inflict these sounds on you, building slowly on drones and military percussion, an impenetrable wall of wordless fuzz and merciless freakery combined in a bolero that simply doesn’t stop. Well, not for ten minutes, anyway, by which time all forms of resistance are useless, and the Apes are ready to serve the second course.

“True Believers,” too, heads close to ten minutes, and again it starts slowly, gently… only this time, it stays that way. Something is building, that much is obvious. But the minutes tick by and too late do you realize that the volume is soaring too, riding a guitar that had too much to dream, to smash towards a crescendo that you’ve been expecting all along, and which still manages to surprise you.

Flip the disc over and there’s more in the same vein, proof positive that the Apes might merely be the latest heirs to a throne that’s been sat in by a succession of names that reaches from the Velvets to the best of Earth… but, like them, they’ve brought their own bottles to the party. “The Unclosing Eye” is rhythmic rain falling on your unprotected brain; “Brought to Light,” at a mere four minutes, is impossibly brief by current standards, and all the more shocking because of that; and then it’s “Sixth Side of the Pentagon,” which borrows half a bass riff from “Set the Controls for the Heart of the Sun,” but has a whole different destination in mind.

This is psychedelic mayhem at its rare and rawest pinnacle; the sort of album you want to play outside, on a summer evening in deepest suburbia, to make your neighbors think there’s a free festival taking place just outside of eye-shot. And if you replace the pool lights with a strobe, you can really scare the pants off them.